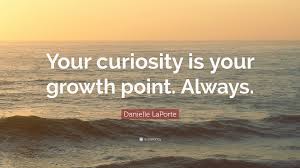 This week, I was listening to the How I Built This Podcast episode with Jen Rubio (of Away luggage), and her story is SO inspiring! And it’s SO in keeping with what I’ve been writing about the past few weeks. In the episode, Jen talks about how she just followed her curiosity to find her big dream. She now runs a $100 million company, and it was never what she thought she’d end up doing!

Without a bachelor’s degree or an MBA, Jen worked her way toward an incredible amount of conventional success with big companies. She’s a rock star of not getting hung up on the “how” and just following her curiosity. She says in the episode, “I never thought, ‘oh I don’t have enough experience,’ I just figured out a way!”

What led her to start her own suitcase company was that attitude of “I’ll figure it out” combined with a willingness to follow her curiosity. In her various roles working for a major world brands, she was traveling a ton, and one day her suitcase broke. She became curious about how she could fix the problem of shoddy luggage — even though that had nothing to do with her career up to that point. But by exploring that curiosity, she discovered a need that had not been met in the market.

In the meantime, she was offered a VP of marketing position in New York for a huge brand — her so-called dream job, the one she’d always thought she’d been working toward. Yet, she talks about sitting in the interview and knowing that it wasn’t what she wanted to do. She was too curious about where her travel brand could take her. She had the gumption, at something like 27 years old, to say “no” to what was a guaranteed journey of “external success” because she was still so curious. Creating her own company wasn’t even her initial dream! But her curiosity and her gut told her that her travel brand was where she ought to go. And she was bold enough to follow it!

If you were in Jen’s position (and maybe you have been in that position before), ask yourself: would you have said yes to the New York opportunity out of fear? Most of us, if we were the person sitting in the chair being offered that opportunity, wouldn’t have been brave enough to turn it down with no guarantee of what was next. But shouldn’t we have done? I’m not saying it always works out, but most of the time we KNOW that the thing we said yes to wasn’t our dream either. But we said yes because it was in front of us, or we perceived it as our only option. And the point of thinking about that is not to punish yourself, but merely to learn from it. To reflect and be open for the next opportunity that arises.

If you apply curiosity to your life and your career, you’ll see a plethora of options out there that you may never have previously considered. My question for you this week is: what are you still curious about? What really drives your curiosity? And when’s the last time you explored it? Or gave yourself the permission to even dream a little bigger when it comes to whatever you’re curious about?