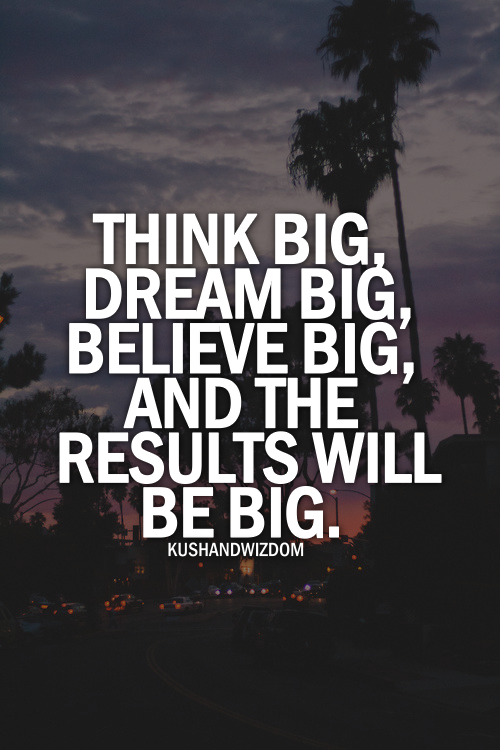 The other day I jotted down a note that’s really stuck with me: “Did T-Ball kill dreaming bigger?” I’m sure you’re wondering how in the world I put these two things together. So here’s a little insight into how I got there…

As I pondered the question from last week of “why are people so afraid of asking for more in their lives?” I couldn’t help but wonder if, in a world where everyone gets a trophy in T-ball, where average is often rewarded as good enough, and where everything is supposedly wonderful (at least on the outside), if we’ve inadvertently said there’s no need to dream bigger?

In our world of social media, we share a lot of how our lives resemble everyone else’s and worry about leaving anyone without an award. In our Instagram and Facebook images, what we see is that everyone has a house and a picket fence and a life that is perfect on the outside. But the problem with that is no one wants to stand out as being different anymore. If we’re giving the same trophy to everyone, aren’t we just saying conformity is the way to go? Society has created an environment where you feel like breaking out of that mold would be criticized. Because you already have so much, because you have what others perceive as good, and because good is supposed to be good enough, you have no “reason” to complain or be dissatisfied with your life!

The opposite of that, the antithesis of falling into the norm, would be having the audacity to dream bigger. To have your own way, your own vision of success. To be the person that actually gets first place (and earns a dang trophy)! The reality is that everyone can’t fit into one mold! And why would we want them to anyway? That’s not the way we were made. The idea of conformity, of living our lives in the box of what success is “supposed” to look like, will slowly kill us. Eventually I think it leads us to feeling almost like we want to burst. Until we are just dying to break out of the straight jacket we’re living in and scream.

If you’re feeling a tug toward something more, it’s absolutely okay to say “good enough is not good enough for me!” Do it now before you want to scream. Take that first step. It’s totally okay to not know what that next thing is yet. Most of us spend so much of our lives living the lie and trying to be satisfied with good enough, it’s going to take a minute for you to allow yourself to get used to dreaming of being bigger!

And if you aren’t instantly inspired, if you don’t already know what that big dream is, it doesn’t mean it’s not there. They’re two very different things: having the tug and the desire for more and being able to identify what that dream is. My belief is that tug wouldn’t be there if it wasn’t meant for you. Just because you haven’t grown enough yet to identify what that tug really means doesn’t mean you’re wrong to feel it. It just means you haven’t found it yet!

So, if you’re feeling that tug toward something more, consider this your permission slip to start exploring! You’ll find it if you just let yourself dream!